What is Sexual Harassment?

Sexual harassment is unwelcome or unwanted sexual advances or requests for sexual favors. It is not always overt. It can include physical, verbal, visual and subtle overtures. Sexual harassment may be gender-related but not necessarily sexually motivated.

Your Rights Against Sexual Harassment in Washington State

To some sexual harassment may seem like harmless horseplay but it is far from that. It is not a joke nor an invitation to prey or victimize anyone. It robs victims of their dignity, pride, and respect.

Some victims of sexual harassment may not complain out of feelings of embarrassment, fear of being labeled a "whiner" and/or even retaliation from their employer. The bottom line is, sexual harassment is illegal and is well-established law in our federal and Washington State Court systems.

The attorneys at Beverly Grant Law Firm P.S. in Tacoma proudly serves much of Western Washington, including Seattle, Lakewood, and Bellevue.

What Behaviors Are Considered a Form of Sexual Harassment? 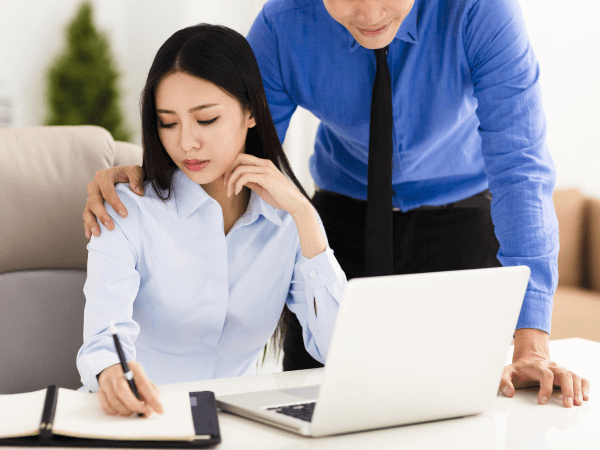 There are names for different types of sexual harassment:

I Feel I'm Being Discriminated Against, What Can I Do?

If you feel you have been the target or victim of sexual harassment by an employer or co-worker, you may want to:

Immediately put the harasser on notice that their behavior is unwelcome and unwanted. In most cases, this is enough to stop the behavior. However, if the harassment continues, contact your immediate supervisor or Human Resources. Make your complaint in writing.

If the harassment continues or if you are uncomfortable directly confronting the harasser, keep a record of all interactions you feel to be inappropriate. Included in your documentation should be all relevant dates, times, places and witnesses, if any.

Check your company's policy for any procedures that need to be followed in reporting sexual harassment claims. Where possible, your claim should be reported in writing. You should use any complaint or grievance system available to you.

If such a procedure does not exist, you should report the harassment to your direct supervisors. If your supervisor is the harasser, report your claim to their immediate supervisor and/or the Human Resource Department.

Once the alleged harassment is reported, your company is obligated by law to conduct an investigation and take immediate action against the harasser, if warranted.

If you feel your employer has not fulfilled this obligation and the harassment or retaliation has ensued, contact Beverly Grant Law Firm, P.S. at once. Please don't hesitate. Speak to an experienced attorney today!

Beverly Grant Law Firm, P.S. also represents men that have been falsely accused of sexual harassment in Tacoma, WA and the states of Washington and California. Each case is assessed on the totality of the circumstances, which may include many other factors such as their work history and demeanor. Traditionally women were usually the victims of unwanted sexual overtures both verbal and physical.

Today, men also hold non-traditional jobs, e.g. nurses, as contrasted to women in the building trades who have been subjected to unwelcome sexual overtures. Also, men can be victims of other men who have sexually harassed and the same for women who are sexually harassed by females. It is all about control, manipulation & power.

Test Your Knowledge on Sexual Harassment

True or False: SEXUAL HARASSMENT IS NOT NECESSARILY GENDER SPECIFIC

Explanation: Traditionally women were usually the victims of unwanted sexual overtures both verbal and physical. Today, men also hold non-traditional jobs, e.g. nurses, as contrasted to women in the building trades who have been subjected to unwelcome sexual overtures.

True or False: SEXUAL HARASSMENT VICTIMS MUST BE OVER 18

Explanation: In some instances, physical overtures towards a minor child can subject the harasser to criminal charges, depending on the activities that s/he is complaining about in regards to the harasser.

Question: SEXUAL HARASSMENT IS USUALLY ABOUT:

E. All of the above

ANSWER: E. ALL OF THE ABOVE

True or False: ONLY AN EMPLOYER OR SUPERVISOR OR CO-WORKER CAN BE HELD LIABLE FOR SEXUAL HARASSMENT

Question: SEXUAL HARASSMENT IS UNLIKELY TO EXIST IF THE ALLEGED VICTIM:

A. Participates in the banter;

B. Welcomes the physical gestures or touchings

C. Fails to let the alleged harasser know that he/ she takes offense to the acts

D. Fails to report the offensive conduct to

E. Suffers no adverse action (denial of a job benefit such as a promotion)

F. All or any of the above are factors that can and should be considered.

Explanation: The controlling word in sexual harassment is "welcomed". If the victim and harasser both participate in "friendly" banter, sexual harassment may be hard to prove, as the alleged victim is participating in the activities that s/he is complaining about in regards to the harasser after representing you!

Please be mindful that although I try to return calls personally, I or my associate review the facts of each intake call and determine from the facts which ones are in the areas of our practice or that we can help. If you do not receive a return call, it is likely that your case is not one that we can take either because it is not an area of law that we practice or due to our current workload (trial, court appearances, depositions, etc) we are unable to assist you. Please know that we value your time as well as ours It is important to know that until there is a fee agreement entered by the client and the firm, Beverly Grant Law Firm, P.S. does not represent you. We represent cases throughout Washington, especially those living in Seattle, Tacoma, and Bellevue.